The JIT have just released their report without changing the DSB's work which has many discrepancies uncovered by the Russians. Their evidence consists mainly of pictures and video materials - all about Buk sightings on Donbass roads. Nowadays it is very easy to fake such evidence by advanced picture and video editing tools: 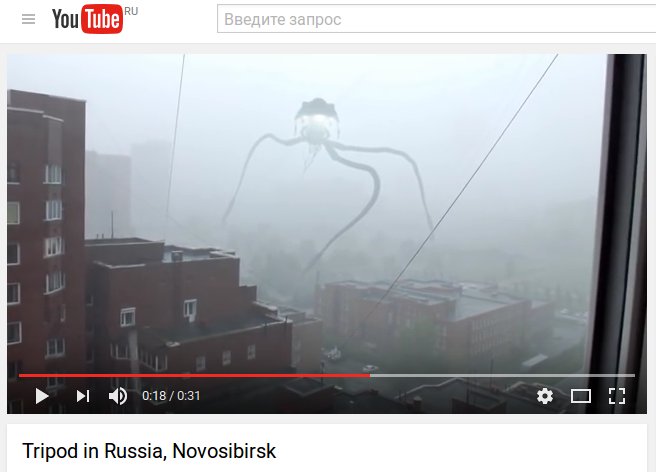 How it could be done is described here.

The most compelling part is links between a Buk  missile and damage: 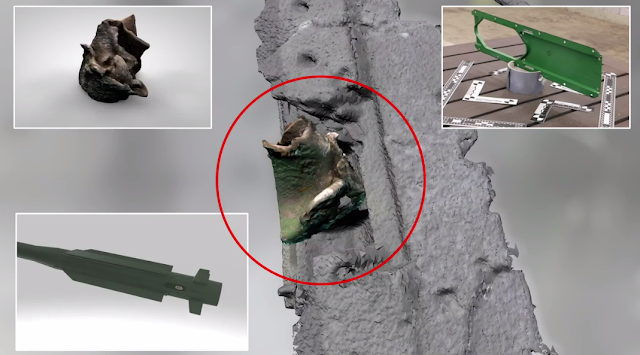 The JIT's presentation timidly blurred the designation of the reference missile they used:

Despite the promise one year ago to pinpoint the exact missile model.

Nevertheless their 3D animation insists it was the missile 9M38M1 with bowties: 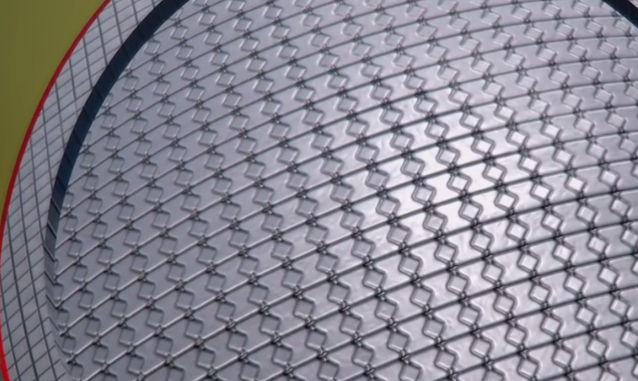 And the fragments from the dismantled reference warhead support this claim: 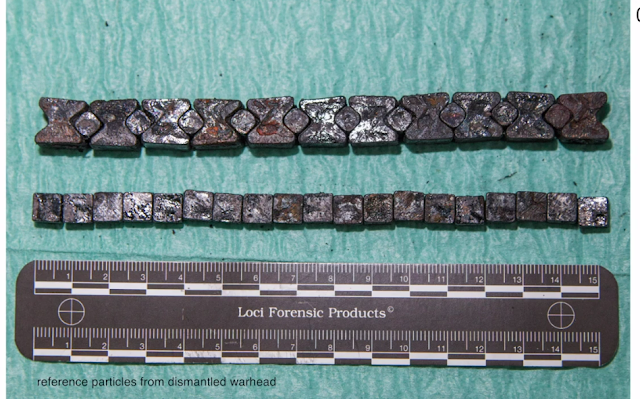 But they still can't show it in this way: 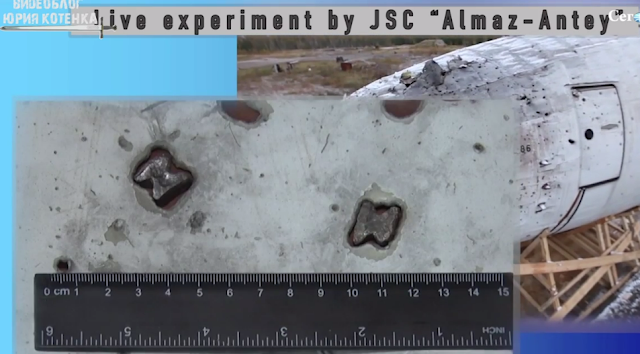 Nothing has changed on the issue of metallurgical analysis of one fragment along with examination of substance residue on all entry holes as Russia offered:

It's very strange because it would be the most compelling proof of their point. Instead there are stories of fiddling with evidence popped up in the letter of Oleg Storchevoi, Deputy Director, Federal Air Transport Agency of Russia.

The sad part is that Russia has the lack of proper information management on the issue. The last briefing held on 26.09.16 was a small information war win for scoundrels. The bumbling wording "no object has been observed near the flight MH17 that could be the cause of the tragedy" delighted all propagandists. It enables them to claim that Russia "abandoned their SU-25 version" proving that the Russian MoD lied at the briefing held on 21.07.2014.

As a Russian native speaker I can dissuade all readers/watchers of western media from final conclusions on what "Russia's opinion" or "Russia's version" are. The western media's cut-out-of-context citation of the wording mentioned above tells for itself.

The context of the wording

At the briefing held two days later on 28.09.16 (the day of the JIT report) the radar data was explained. The one particular radar produced that data (Ust-Donetsk) has a property to miss objects moving slowly towards or away from the radar. That is any object having the trajectory perpendicular to the radar beam would not be detected (and then observed on a screen) by the radar due to the Doppler rejection filters used to suppress meteorological artefacts. E.g. an object circling around the radar would not be visible. It applies to the MH17 case in the following way: 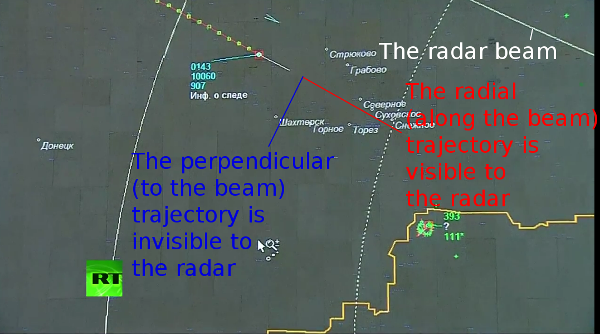 Any Buk missile launched from the area eastwards from the crash site (the red line above) would be surely detected. But any Buk missile launched from the area southwards (the blue line) would be filtered out because of having the velocity vector close to perpendicular to the radar beam. The same applies to aircraft. So that wording should be understood in the context of limitations of one particular radar. The latter didn't detect any missile from the direction eastward to the crash site but should if any. And the radar data can neither prove nor disprove of any moving object from a southern direction because of the limitations. The MoD's object 3505 moved almost perpendicularly to the Ust-Donetsk's radar beam: 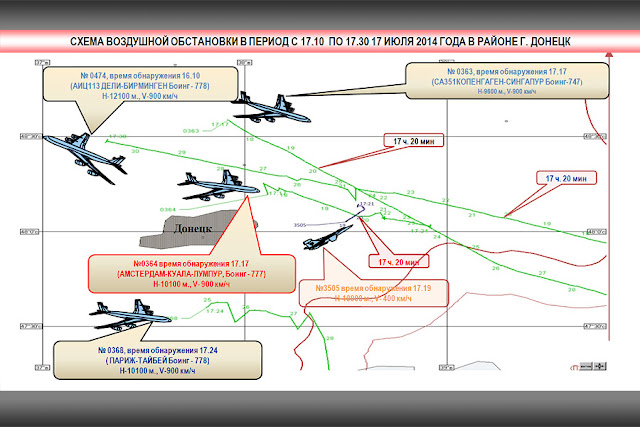 The discrepancies in the DSB/JIT version

All the tests and work presented in the previous Russian briefings were explained in a more clear way by Malyshevsky, an Almaz-Antey representative. If you had no time to see the video then you can read (and see) the following excerpts.

(The 'model' below means the warhead construction in conjunction with the launch direction. The DSB/JIT claim that the latter was from near Snizhne. While
the Almaz-Antey experts claim the only direction that can inflict the observable damage is from Zaroschenskoe IF IT WERE A BUK MISSILE... I will explain this last clause at the end)

The models DSB/JIT used can not explain damage to several parts of the skin because the parts are out of reach according to their light model: 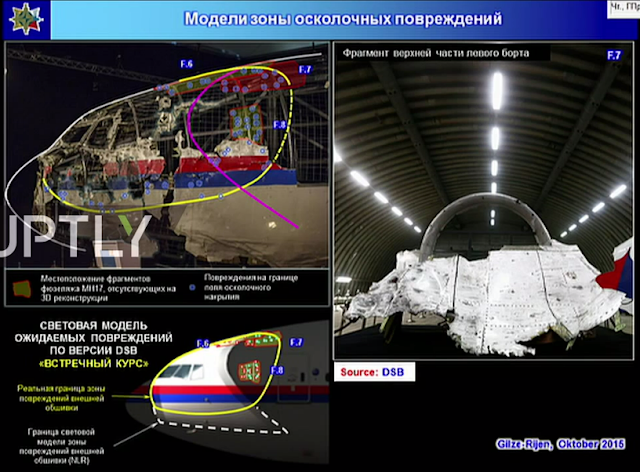 The red area 2 above has real damage but is situated outside the DSB/JIT's light spot.

The DSB didn't observe damage to the skin after the frame 220: 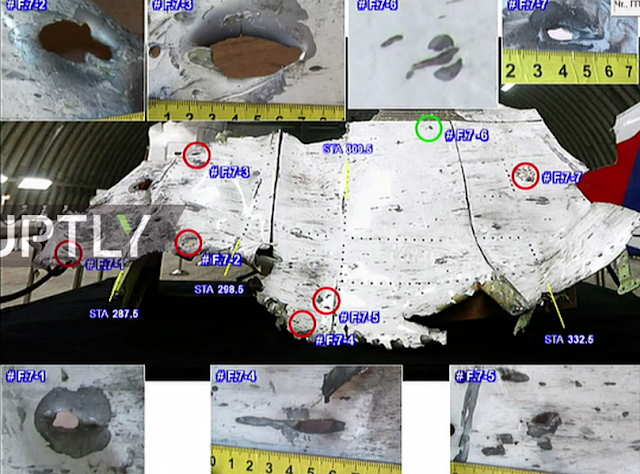 This internal damage without skin penetrations nearby points to a fragment trajectory along the skin, completely inconsistent with the DSB/JIT's launch from Snizhne: 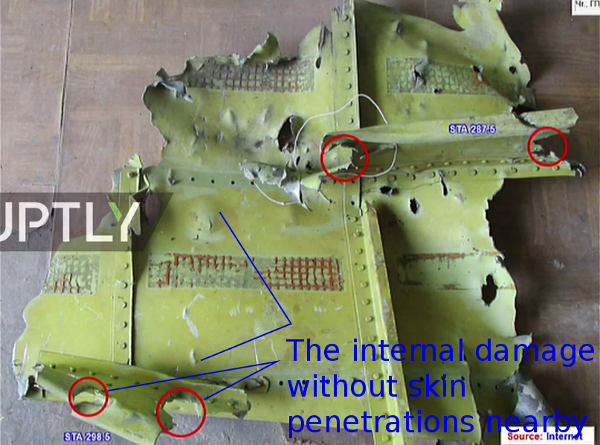 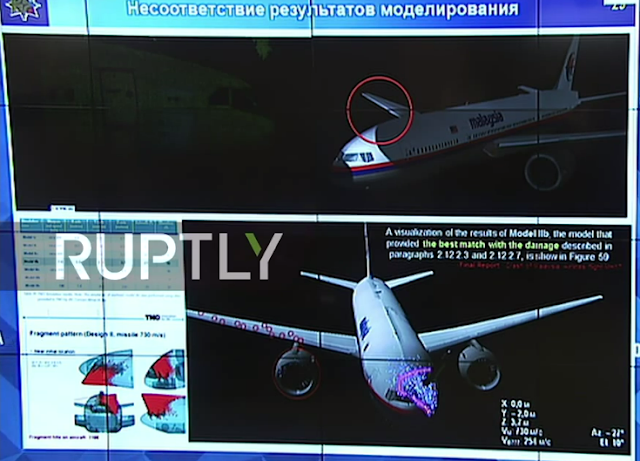 In reality there is no damage to the right wing but the left wing and engine bear marks of fragmentation damage. The Almaz-Antey's model has no such discrepancies: 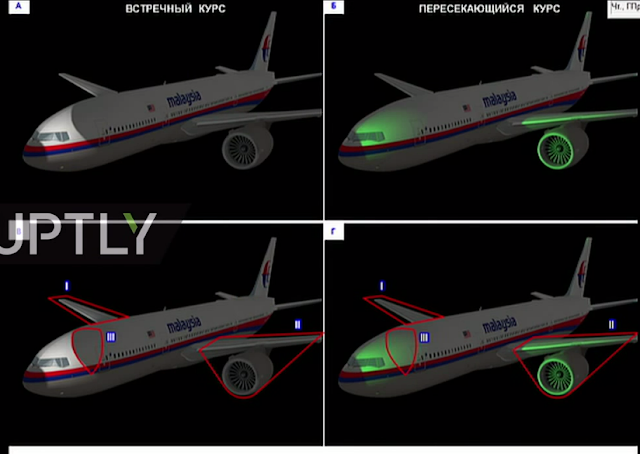 The DSB/JIT's model is on the left side. The Almaz-Antey's one is on the right. 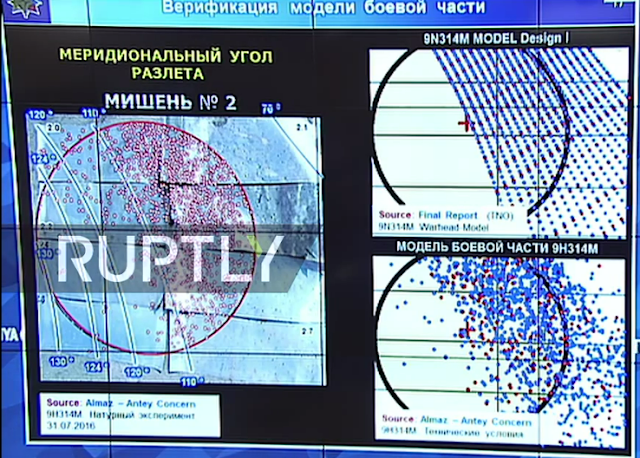 Or the same in a more clear way: 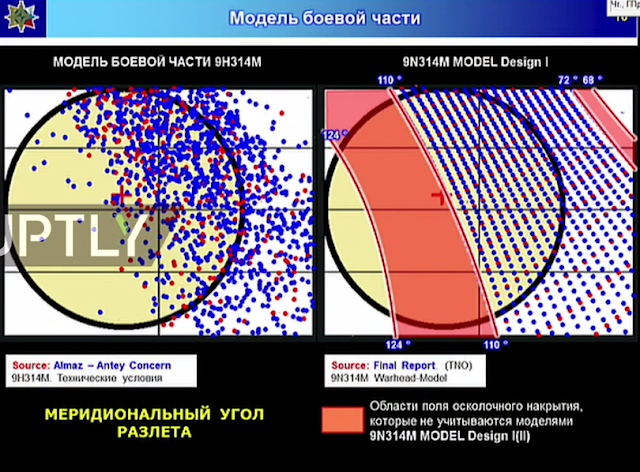 The red strips are where the DSB/JIT's model differs from the real Buk warhead. 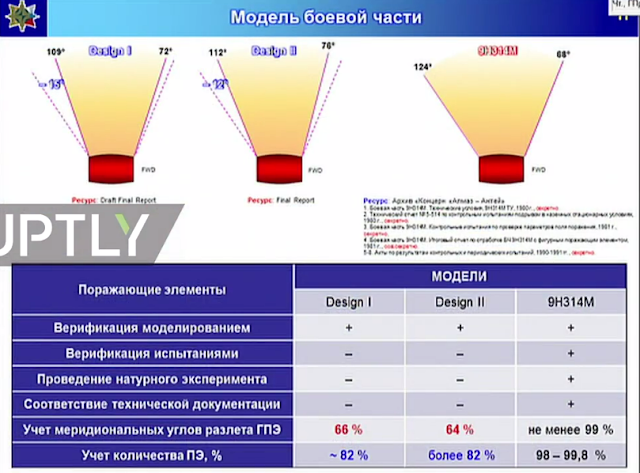 The remarkable holes clearly visible in the two Almaz-Antey's tests are absent on the MH17's skin: 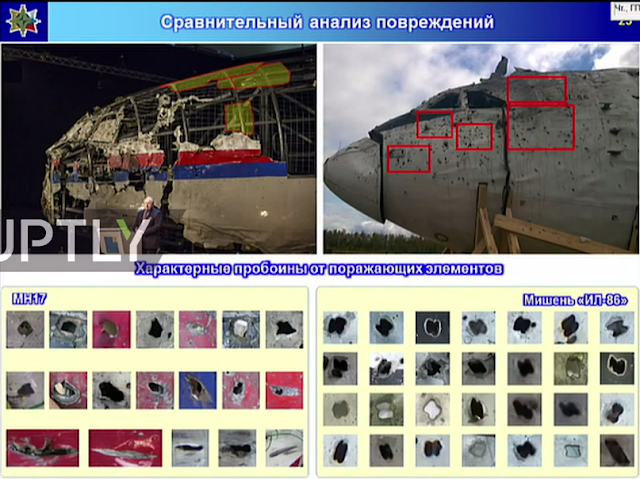 At the places where  the MH17 has many ricochets a Buk missile from Snizhne (the Almaz-Antey's test with Il-86) should penetrate the skin. The MH17's skin is on the left side and the corresponding part of the Il-86 is on the right side: 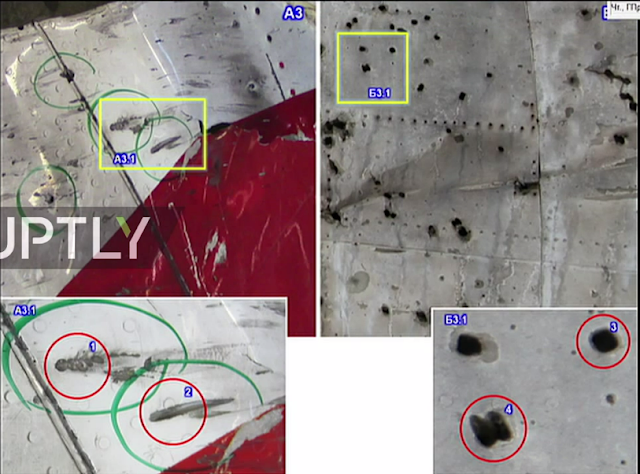 And yet another confirmation (besides the absent missile parts and a fragment getting heavier - from the letter of Oleg Storchevoi, Deputy Director, Federal Air Transport Agency of Russia ) that the investigators fiddle with evidence. The final report draft contained one hole density value but after they had learnt the Almaz-Antey's objections the hole density was changed to a value 3 times greater: 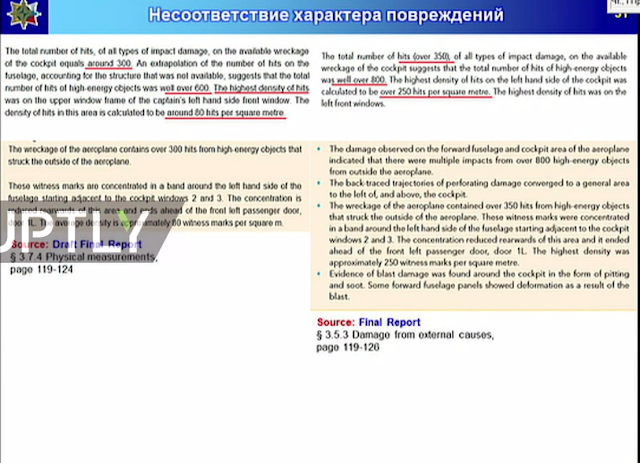 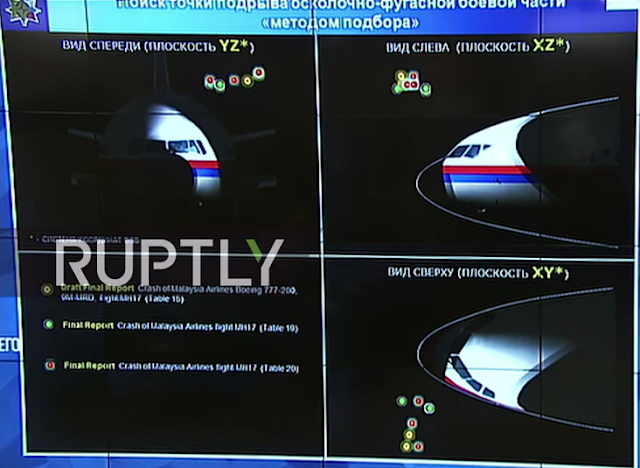 Ballistics (that is science without politics) can't produce that area bigger than 0.5m in size.

By revealing the Ust-Donetsk radar data Russia establishes the fact that no other object moved to the flight MH17 from Snizhne or near it. It doesn't disprove the missile being launched or an aircraft flying along directions that are perpendicular to the direction to the Ust-Donetsk radar. Taking into account that the flight MH17 had been assigned the number 0364 on the MoD's picture above and had been assigned different numbers on the other two showed radar data displays (Ust-Donetsk and Rostov) one can speculate Russian MoD have more radar data in their possession.

The Buk producer Almaz-Antey have been focusing on the Buk version only because they have the most compelling competence on the matter. They have been trying to establish the conditions that make the Buk version plausible in regards to the known damage and the found fragments. This conditions are the missile 9M38 (not 9M38M1) and the launch site around Zaroschenskoe (not Snizhne or any other site). Their conclusions are based on the following facts:
The Almaz-Antey's work can't disprove any other version because the DSB/JIT refused to complete several decisively important types of analysis. Malyshevsky mentioned  "some unexplained damage nuances" near the end of the presentation. That is why the Almaz-Antey keep always adding the caveat: "IF IT WERE A BUK MISSILE".

One important thing escapes the attention of the western media. The Russian officials don't speak about one particular version or another. The only way to establish the truth is a fact-based investigation to reveal a winner among competing versions trying to explain the observed facts. To this day the Russian experts can't come up with a final conclusion because of the lack of full access to the actual material such as damaged fragment, the found parts of the missile, the found fragments, Ukrainian radar data etc.